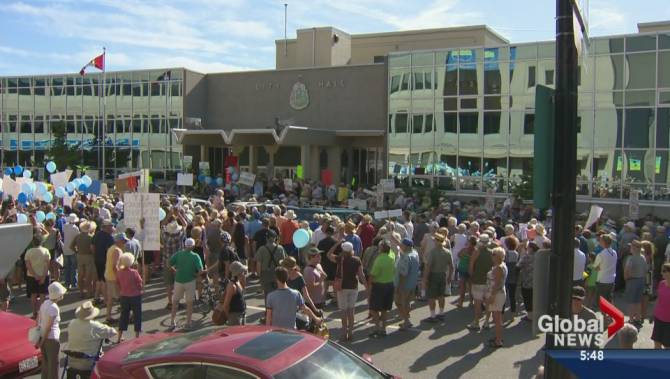 PENTICTON — Opponents of a proposed waterslide park in Penticton have been working feverishly this past month to put a stop to the project — but to no avail. Wednesday was the deadline for mayor and council to reconsider bringing the issue back to council. In a six to one vote, they’ve decided to move ahead.

Clifford Martin says he’s stunned and outraged by the outcome.

He organized a massive protest against the project last Monday that saw hundreds of people clog Main Street.

“They’ve got no respect for the public. There’s so many people opposed to it and they’re not looking at the whole big picture of it all,” says Martin.

Despite the rally’s turnout and loud opposition, Mayor Andrew Jakubeit says he stands by the project, adding the water park and marina expansion will enhance the Skaha waterfront experience.

But Hannah Hyland believes the number of people against the project outweigh those who support it. She’s been collecting signatures from local residents and even tourists.

“We believe in democracy and we believe our council needs to listen to the voices of the people,” says Hyland.

Campbell Watt, the lone councillor who voted to bring the issue back for reconsideration, says there’s still time to make a critical decision.

“In my mind, there are still some unanswered questions. There’s a significant time frame to deal with the project; it isn’t going  to happen for a couple of years. I didn’t see any harm in taking a break and reevaluating the whole thing before moving forward,” explains Watt.

The water park construction is expected to begin in three years. Developer Trio Marine Group still needs to provide detailed drawings of its plans, get financing and provide a bond.