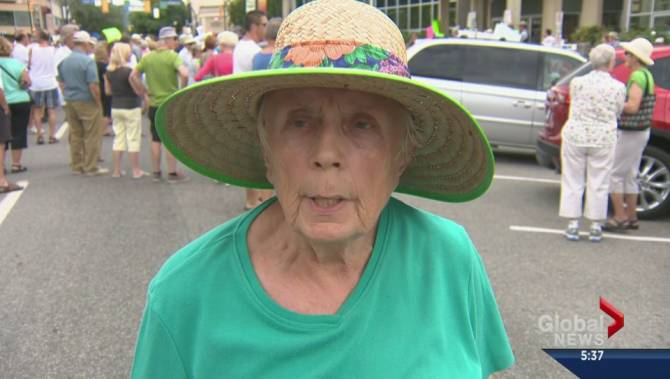 PENTICTON — Residents have been told it’s a done deal, but they refuse to give up. Hundreds rallied at the steps of Penticton city hall Tuesday against a marina and water slides development on Skaha Lake.

This is the second major protest against the project in the last two weeks.

Council revisited the project’s approval at a meeting last week, where all but one councillor (Campbell Watt) voted for the development.

Now, thousands of residents are signing two separate petitions, one against the development and what they say was a lack of public consultation and the other to recall council itself.

“We have a dictatorship in Penticton today,” says petition organizer, Elvena Slump. “We don’t have council that represents the people of Penticton.”

While residents have been told the case it closed, they’re taking it upon themselves to reopen it.

“[Mayor Andrew Jakubeit] is trying to ignore the public has much as possible. It’s going to be legal action from here on through,” says rally organizer Clifford Martin.

Martin didn’t expand on when and how they will approach taking legal action against city council, but says he will use the 3,000+ signatures as proof the development isn’t what residents want.

The developer is also speaking out to clear up any misinformation on the project.

“We think this is a good opportunity for waterfront enhancement and re-establishing Penticton as a premiere place for people to come and creating another attraction,” says Jakubeit.

The 30-day window for the project to be put back on council’s agenda has come and past.

Construction for all the water park won’t begin until 2018.